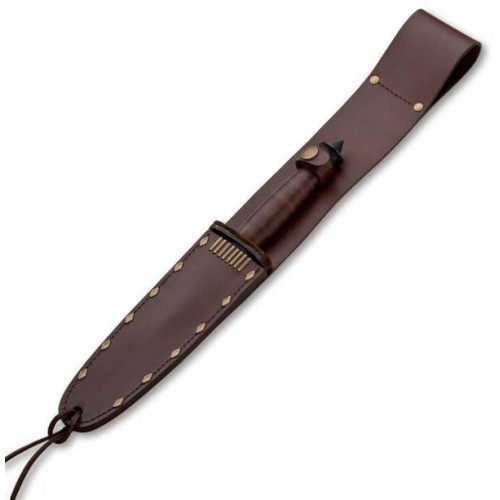 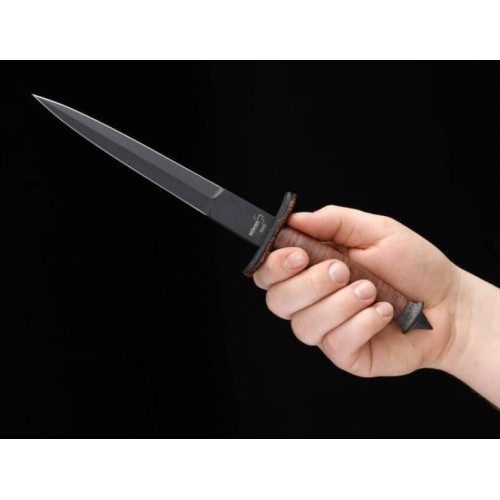 In July 1942, the Devil's Brigade, known as the Devil's Brigade, was launched. Under the official designation of First Special Service Force, American and Canadian soldiers were combined into one special unit that was specially trained for combat behind enemy lines. The roots of many special forces after WWII can be traced back to this unit. The numerous night actions, for which all faces were constantly blackened to camouflage themselves for the first time, earned them the nickname Black Devils in the German Wehrmacht, demonstrating the great respect their opponents have for this relatively small unit.

An important piece of equipment for the Devil's Brigade was the specially designed V-42 combat knife, which was also part of the intensive close combat training. The pressed leather disc handle ends in a pointed hammer. A thin leather padding underneath the slightly curved guard should prevent injury from hitting. The SK-85 non-stainless carbon steel coated blade is sanded on both sides and has a grooved thumb rest in the ricasso area. This legendary dagger still adorns the coat of arms of the US Army Special Forces today. We deliver this selected collector's item not only with the classic deeply seated leather case, but also with a replica of the unit's textile insignia, the red spearhead, as well as a reproduction of the original German-language sticker with the text "The thick end is still coming!" including the first SSF insignia, which was pasted behind enemy lines at night on walls, cars, walls, doors, etc. to demoralize. A set that is worth collecting in terms of military history. 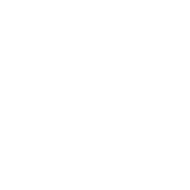 Ganzo Multiherramienta g202
Multipurpose tool made of stainless steel, with 440C steel blades. Components:Pliers (pliers, standard pliers, steel wire cutter)Can / bottle openerF..
25.00€
Ex Tax:20.66€
Add to Cart
Add to Wish List Compare this Product
Buy Now
We use our own and third-party cookies to obtain statistical data on the navigation of our users and improve our services ... more information here