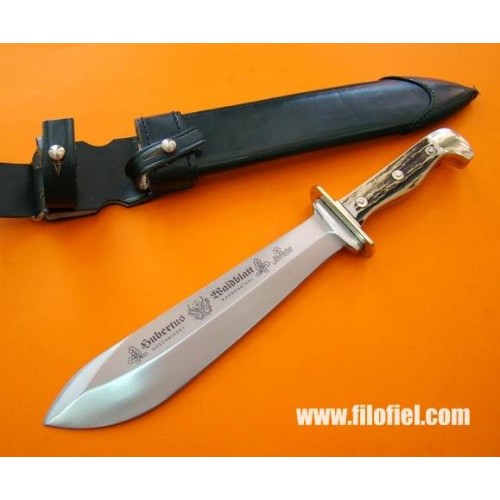 In the 16th century, the "Waidbesteck" hunting knife used to be a set of hunting tools consisting of a large gutting knife and different additional components, such as a steel pin and a sharpening steel.

As a hunting skinning tool, the gutting knife was equipped with a thick and wide blade and a short handle. It was also possible to use the ripper knife as a chopping knife to remove brush while stalking the game.

When traditional hunting became stronger in the 1930s, the demand for a universal hunting tool arose again. It was developed in different designs by three German hunting masters who patented their developments / inventions as "Waidblatt". Along with a "Nicker", a classic-style German hunting knife ("Nicker"), the Waidblatt is called the Waidbesteck (Hunter's Knife Set). Both knives are paired with a high quality green leather kangaroo sheath. Our HUBERTUS Waidblatt hunting knife was developed in cooperation with cutter Carl Eickhorn in the early 1950s. Carl Eickhorn was the leading manufacturer of sharp weapons in Solingen at the time. The Waidblatt and Waidbesteck were designed by Carl Eickhorn and HUBERTUS Kuno Ritter in partnership and marketed under the brand names of both cuthers.

When Carl Eickhorn had to file for bankruptcy in 1976, the dies and tools became the property of HUBERTUS.