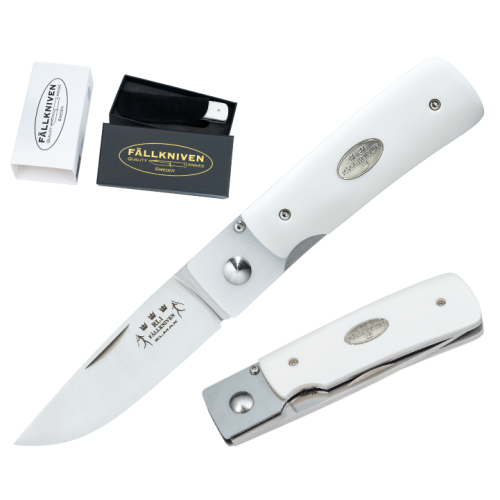 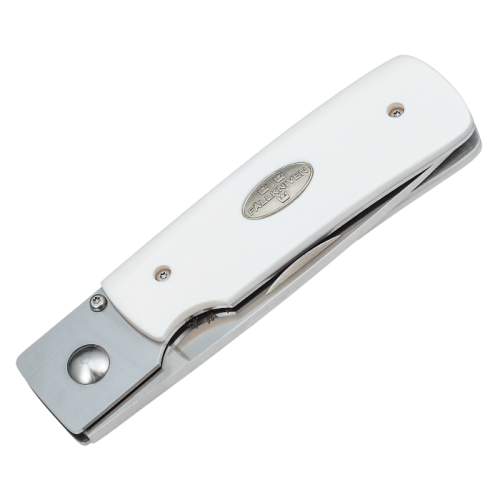 I’m pretty sure it was the late knifemaker Robert W Loveless who developed the drop point-shaped knife blade, i.e. a blade shape where the tip of the blade falls in a soft line down towards the edge. As a hunter, you can certainly see why the tip of the knife you handle the prey with, should have a rather blunt tip, but I also think that many other users of knives think that a drop point-shaped blade looks nice and safe.

RL1 is a homage, a tribute to this giant in the knife maker guild and if there is one thing I have strived for on this knife, it is simplicity in the design. This, too, was a detail that Loveless cherished and which was his hallmark. I had the pleasure of having a chat with him in the late 1990s and it turned out, among other things, that he had noticed the F1 knife introduced a few years earlier on the world market. I asked him for his opinion on the knife and he “liked what he had seen,” he said. To my surprise, he told me that he was happy to draw his inspiration from Scandinavian knives, he said he liked the simple, clean, almost Spartan lines of these knives.

Top steel is the new black

On top of that he also strived to work with really good edge steel and here too he was a forerunner. At least hunters like when the knife remains sharp and today it is powder steel, advanced alloy steel and very special hardening methods that we apply when developing a knife blade that is both strong and stays sharp.

I don’t think Loveless made his own folding knife, but at least I know he designed some. All of them carry his clear signature, i.e. simple, clean lines, good edge steel, safe blade locking. However, the convex edge is unique to this RL1 knife but it has its explanation. This type of edge is at least a thousand years old and the explanation lies in the fact that it was the strongest and at the same time sharpest edge that could be produced on the edge tools at that time. It was only with the industrialization that flat-ground blades became possible to mass produce and that today is the prevailing manufacturing method when grinding out an edge. As a result, the convex blade shape has almost disappeared in the 20th century.

I reintroduced this edge shape to my manufacturers in Japan in the early 2000s and today it is the concept that is our standard on our fixed blade knives. RL1 is the folding knife that from the very beginning has a drop point blade profile with a convex edge and is thus a unique piece of art on the world market. To this we have added a blade lock that I consider to be the world’s strongest/safest, the so-called liner-lock, where part of the inner construction of the handle is folded in behind the back of the blade when the blade is fully extended. Another detail that may not be noticeable is a small ball on the locking liner that folds into a recess on the blade tang when the blade is recessed and prevents the blade from being folded out without further ado. Making a liner-lock lock is not so difficult but if you are not very careful and know what you are doing, it can all end up in a terrible accident. This is why you sometimes see folding knife models with an extra locking ring, i.e. the manufacturer has not been able to ensure a 100% safe lock. The advantage of a carefully manufactured liner-lock folding knife is the openness of the design, the knife will be easy to keep clean, there are no nooks where dirt and dust can accumulate and that can knock out the safety system. There are no springs that can break, no spaces that can be filled with sand, soil or snow and that can cause the locking to fail. Again, it is simplicity that is the most important factor for the locking to work. And making it easy is extremely difficult and requires an experience and knowledge that does not exist in so many places in the world. So, a really safe liner-lock folding knife is hard to find, only the best manufacturers know about that.

The blade bolt is threaded and the reason is that you as a user should be able to adjust with what inertia the blade should be folded in and out. On either side of the blade are two round teflon layers that provide a comfortable blade action and can be replaced if necessary in the future. I now urge no one to immediately start adjusting the blade but give the knife a few months before you try to adjust the blade action. Once the torx nut is dislodged from its original position, you must re-add some thread lock to prevent it from unscrewing or tightening itself. In any case, all bolts and distances are available to buy as spare parts in case you loose something.

The base model RL1di has handle scales in desert iron wood and when it comes to the management of this exotic kind of wood, I would like to point out linseed oil-based products, i.e. about the same as for wood stocks for shotguns. Anyhow, any standard wood polish i