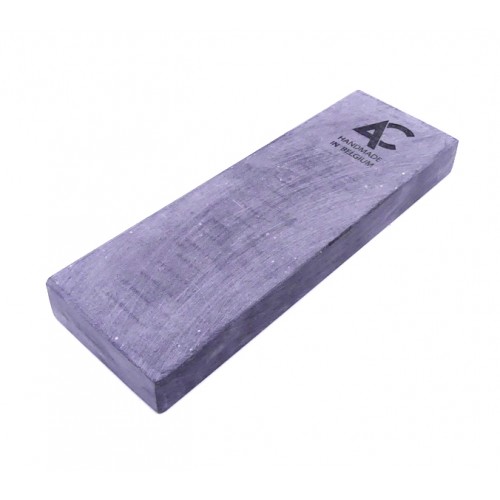 The Belgian blue whetstone is mined together with the Coticule and in the same place, this blue stone comes in wide vertical layers with the fine Coticule seams in the middle. It was formed in the same way and at the same time as the Coticule. The presence of iron oxide in the stone explains the bluish-purple color. Like the Coticule, extraction is a time-consuming task and must be carried out very meticulously, without the use of machinery.

Belgian blue whetstone consists of 1 layer with a thickness between 13 and 16 mm. Unlike the Coticule, it comes without a substrate to give it additional strength and is not divided into categories like Coticule, and there are almost never any imperfections on the surface. The Belgian blue whetstone is only produced in rectangular shape and due to the deposition of thick strata of sedimentary rock, large sizes are the rule rather than the exception. Production is carried out using traditional methods, and a small tolerance for dimensions is perfectly normal.

Sharpening always uses water. All that is required is to wet the surface, it is not necessary to submerge the stone. During sharpening, garnets are released from the surface, the more garnets that are released, the more abrasive the polishing compound becomes.

A frequently used method of increasing abrasiveness is to use a grinding stone to produce a high garnet polishing compound on the surface of the whetstone. This is done by rubbing the stone with another and the bluish purple polishing compound does not take long to appear. For fine honing, the grinding compound is diluted in several stages with a small amount of water until finally only water remains on the surface.

Belgian blue stone is a non-porous stone and cannot be clogged. Use only water for sharpening, not oil. The oil is only used with porous stones to prevent iron particles from getting trapped in the pores and clogging it.

Flattened: Place a piece of sandpaper on a flat surface. Put some water and rub the stone until it is flat. use +/- 80 to 100 micron grit sandpaper.

Out of Stock
Morakniv Firesteel 11859
Flint fire starter or firesteel to ignite with sparks. Valid for any emergency situation. Very long duration Measure 100 mm. Useful flint measurem..
14.50€
Ex Tax:11.98€
Add to Cart
Add to Wish List Compare this Product
Buy Now Encargar este Artículo
We use our own and third-party cookies to obtain statistical data on the navigation of our users and improve our services ... more information here